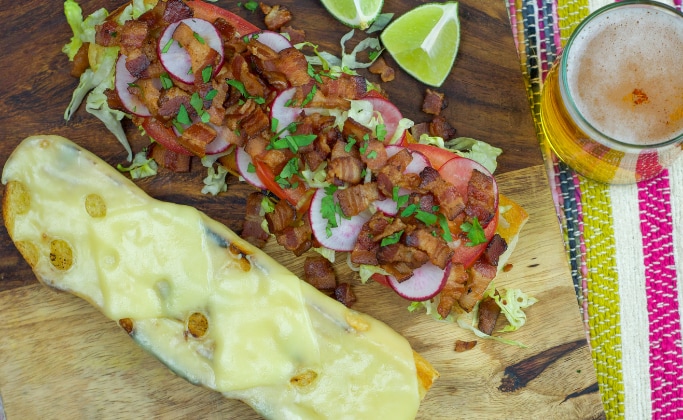 Cut a baguette in half and layer 4 slices of Gayo Azul® Swiss Cheese Slices on one half. Place both halves of the baguette on a baking tray, cut side up. Broil in the oven for 5 minutes or until cheese is melted and the baguette is toasted.

In the meantime cook ¼ lb of bacon to package instructions. Once cooked thoroughly, chop into 1 inch size pieces. While baguette and bacon are cooking, shred the lettuce and slice the tomatoes and radishes.

Once the baguette is toasted and bacon is cooked, it is time to assemble. To the toasted half the baguette add the shredded lettuce, chopped bacon, tomato slices, and sliced radishes. Garnish to taste with chopped cilantro and a squeeze of lime juice, then finish off by adding the melted cheese baguette half on top.